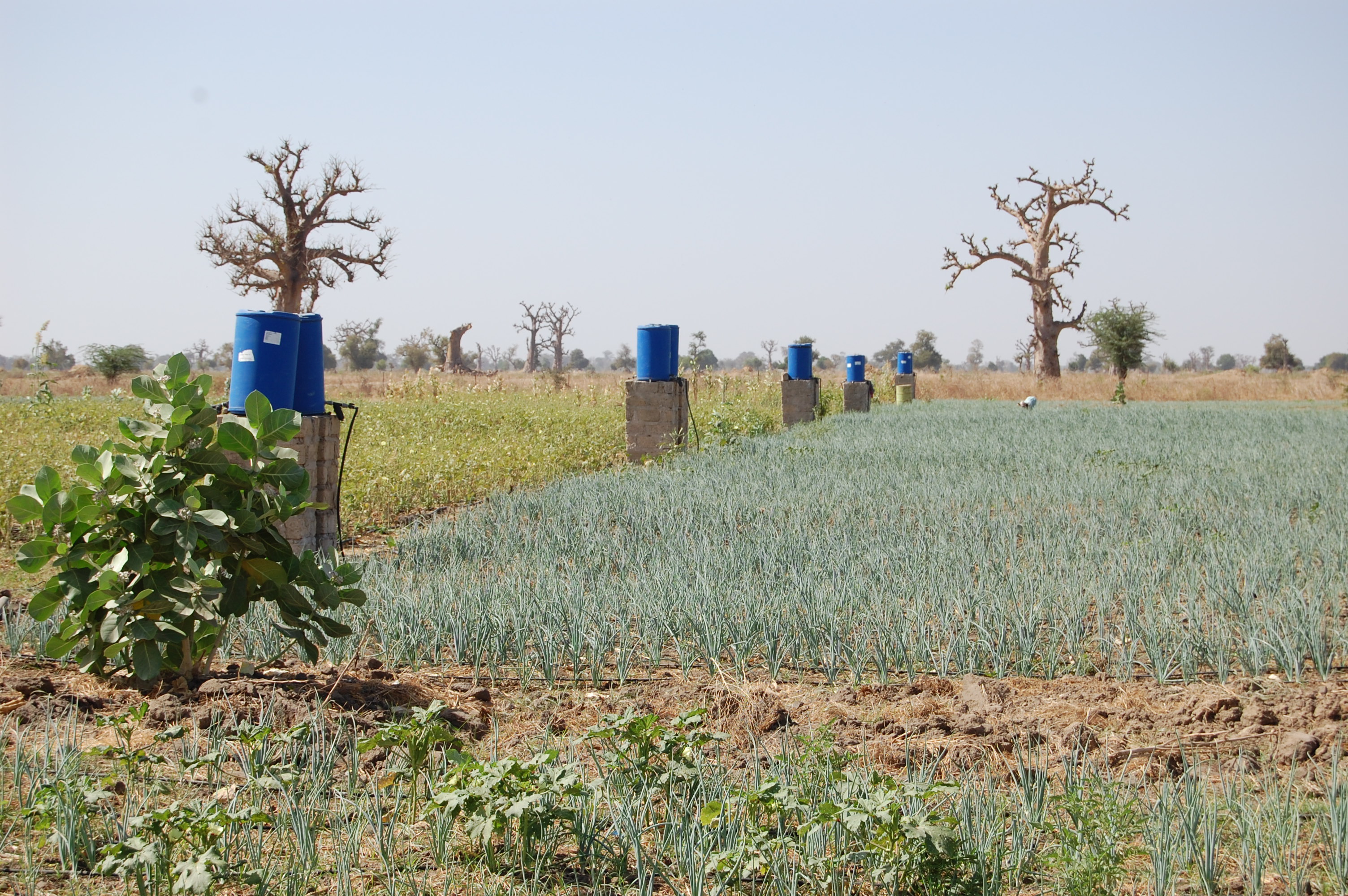 A family member sent me an interesting article regarding drip irrigation in West Africa and specifically of the efforts of the Israeli initiative, African Market Garden.  This is the type of system we hope to install in the near future in Beer-Sheba. Here is the article in its entirety from Reuters.

* Seen as potential to break cycles of hunger

KEUR YABA DIOP, Senegal, May 6 (Reuters) – As the world’s aid agencies scramble, yet again, to feed millions of hungry in Africa’s Sahel, some smallholders in the semi-arid region are reporting bumper harvests of onions, potatoes and tomatoes.

The reason? Drip irrigation systems made up of water tanks and rows of black pipes, an Israeli innovation that some predict could end the area’s aid dependency. Others however, including supporters of the system, warn of caveats.

“With the watering cans, we couldn’t do more than one harvest per year. With this innovation, we can do as many as three, so our earnings are multiplied by three,” said Yamar Diop, a 73-year-old father of ten.

During a visit to the region last week, U.N. aid chief John Holmes appealed not just for the tens of millions of dollars needed to keep people alive, but for more action to address the root causes of the recurrent food crises.

Farmers like Diop say they are doing just that. He is one of about 2,500 farmers across the Sahel who, over the last few years, have taken part in the African Market Garden, an Israeli initiative to use low pressure drip irrigation to break dependence on rain and boost crops, nutrition and incomes.

Diop’s harvests will earn him 800,000 CFA francs ($1,624) over the year, while the U.N. will spend $190 million over the same period to get through the food crisis, prompting calls for the donorsto invest more on long term projects.

“Niger is going to have a big problem this year,” said Dov Pasternak, the head of the Sahel programme at the International Crops Research Institute for the Semi-Arid Tropics (ICRISAT), referring to the rush to bring aid into the land-locked nation.

“This will cost millions but how much is being spent on agriculture? I have a gut feeling the ratio is huge in favour of food relief,” he said. “It is the poverty that we have to deal with, rather than providing food security.”

ICRISAT says the African Market Garden irrigation system means returns on land, water and labour are multiplied by two, four and six, respectively, when compared with traditional vegetable production systems on the continent.

That could allow places like Niger to shift from perennial sites of hunger into producers of food for the regional market of around 250 million people, Pasternak said.

Contrary to the area’s drought-ridden image, Pasternak says water is available. Most obvious are the billions of litres that flow down Niger’s eponymous river. But, with technology and investment, shallow underground bodies called dallos, or deeper regional aquifers, offer trillions of litres of potential water.

Consequently, Pasternak argues that farmers should be helped to invest in irrigation and focus on producing high yield crops that they can sell, and use the money to buy food that is more reliable and cheaper to grow elsewhere.

“You cannot rely on rain for sustainable agriculture as two out of five are drought years,” he said.

Citing successes turning deserts back home into bread baskets, Israel says it can help revamp agriculture in Africa’s Sahel and is funding a string of similar projects in the region.

At the Keur Yaba Diop site, near Thies, farmers paid an initial 15,000 CFA to join the project, around 10 percent of the full cost of the equipment. They also pay a bill of around 60,000 CFA for water and fertilisers during each harvest.

Some fell behind on payments and were kicked off the project. Others struggled with the routine maintenance needed to keep water flowing the irrigation pipes. In one project, insistence that farmers grew organic crops has trimmed volumes.

But the project managers are bullish and Diop, dubbed a “model student”, has taken up spare land and reinvested money he earned to buy more irrigation kits and farm more land.

“Donors say it is too expensive. But I tell them that you have to invest but the payback is quick. In Africa there is a negative attitude towards investment,” Pasternak said.

The cost of scaling up the project is a major concern, but not the only one, says Bruce Langford, an irrigation expert and senior lecturer at the University of East Anglia in the UK.

“Is it likely that farmers will copy-cat this technology without external incentives? My gut feeling is they won’t because it is very expensive,” he said, warning that the systems risked costing far more than the $500-$3,000 per hectare threshold of affordability for irrigation schemes.

Langford also flagged issues such the impact on water sources if projects are replicated on a large scale, access to markets and the need to renew equipment due to damage in the harsh conditions. ICRISAT says current models last three years.

“The research needs doing, the pilot testing needs doing. (But) the farmers need to be seriously engaged as to whether they think the technology is going to work,” he said.

Alioune Diouf, a technical advisor for the Israeli embassy in Senegal, said the simplification of technology would help change the mentality of farmers, to make them think more like entrepreneurs, but more needs to be done to support them.

“Drip irrigation can and must be a solution for agriculture in Africa but it must be accompanied by other parameters like organisation and education,” he said.

“If there isn’t this, you can forget agriculture.” (Editing by Philippa Fletcher)